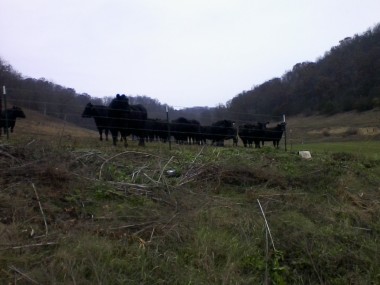 Off in the distance or in the woods behind me, I heard their yipping and howling at night.  Coyotes.  It was all very new to me when I first arrived in August.  In my life, I have not seen many coyotes.  Some years ago, I spotted a coyote on the edge of a busy road, actually at the ramp coming off the Interstate, where I used to live.  My heart went out to it.  To me, it is not a dog.  It is not a threat to me.  It is a wild animal.  A beautiful, wild animal.

Although I don’t want a coyote to get my cat, I am against outright killing them.  Our book club read “Coyote America” by Dan Flores, which details the systematic eradication of the coyote since the white man arrived and ranching began.  It was a painful book to read.  Very painful.  They were being killed to protect livestock, as in cattle and sheep.  It is still happening today.

Unlike other species like wolves that have come very close to extinction, the coyote has somehow survived the onslaught of cyanide poisoning, trapping, etc. throughout the years.  Dan Flores states in his book that coyotes started having 19 pups instead of just the normal 5 when confronted with poisoning and trapping.

So, the cattle arrived late fall of 2017, a few months after I moved in, across the street from where I live and down the road.  There are about 20 of them.  Since then, no coyotes yipping and howling.  Perhaps I heard them possibly one or two nights the whole winter.  I don’t know the habits of coyotes and how much noise they make in winter but I started wondering if I am witnessing a “Coyote America” across the street.  Of course, I have no proof.  Just a deduction.

In Wisconsin it is legal to kill coyotes on your property.  So, there is nothing I can do about this if it is indeed happening.  In an article by Ben Goldfarb, September 7, 2016 in Science Magazine, he states, that in 2015, 68,000 coyotes were killed, among the other predators on the list.  This is still going on.  I have started looking into this and found there are biologists that are trying to find other ways to protect both the coyote and the livestock.  Whether these solutions will convince the ranchers to change is another story.

2 thoughts on “Cattle and Coyotes”

Climate Change: We Are Insulated