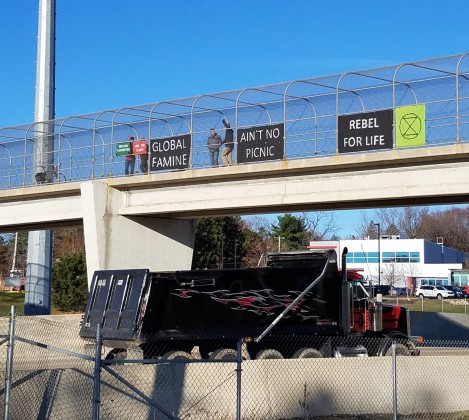 It was 5:30 a.m. this past Monday, and I was headed to Madison for Extinction Rebellion’s first direct action there.  I live about 2 hours away, and, although there are a lot of progressive people in my area . . . well . . . there wasn’t any Extinction Rebellion group.  And, because it is so rural, I wanted to reach a few more people.  I love my new rural lifestyle but there is nothing like being in the streets of Chicago for a protest.

I gave them the measurements and how to get the lettering onto the fabric, etc. with a projector.  There were some challenges, and I offered whatever assistance I could via email but they came through and did a great job!

There was a city worker that stopped by after we got the banners up and told us that we shouldn’t be doing this.  None of us are ready to get arrested.  We are not as bold as Extinction Rebellion is in the UK or other European countries.  Even if a police officer came by, I seriously doubt whether he would have arrested us.

But then, maybe it is time I think about getting arrested.  This is climate change . . . and with all the new pressure on the governments of all countries to do something about it . . . nothing is happening yet.  What else is there besides getting arrested?

Climate Change: We Are Insulated